No, not all “religious paths lead to God”. Not even close.

“We learned a great deal in [the 20th] century about what the world looks like without Christian moral restraint. This is your society on utilitarian neo-paganism.”

I like subscribing to archeology news websites. It’s all fascinating stuff. 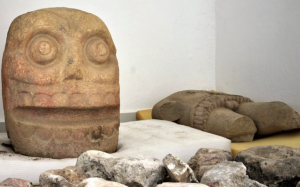 “Priests worshipped Xipe Totec by skinning human victims and then donning their skins. The ritual was seen as a way to ensure fertility and regeneration,” according to the AP.

Mexican archaeologists have discovered what they say is the first temple of a pre-Hispanic fertility god known as the Flayed Lord who is depicted as a skinned human corpse.

The discovery is being hailed as significant by authorities at Mexico’s National Institute of Anthropology and History because it is a whole temple, not merely depictions of the deity, which have been found in other cultures.

“It had an extra hand dangling off one arm, suggesting the god was wearing the skin of a sacrificial victim,” the Associated Press reports.