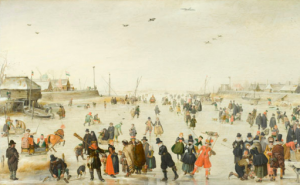 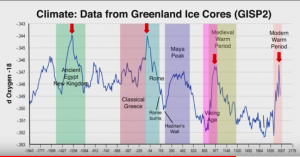 The Climate Hysterians seem to be content to read the headlines and freak out. And while I agree that there’s nothing quite like the thrill of horror one gets by this method, it seems that even the slightest effort is required to dispel the whole thing. You don’t have to be a “climate scientist”. You look only have to look the teeniest bit more closely and you find immediately what the earth’s geological records show: 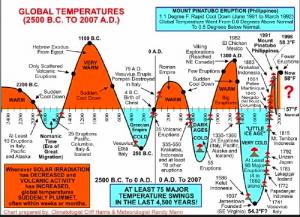 …climate goes up and climate goes down, in a big, long, regular SINE wave. It’s just that we’ve had the means to measure this only for the last lifetime or so. The other thing it shows, is that when things are warmer, humans pretty much do better. If you were to make a graph showing the relatively peaceful and prosperous periods compared to the Bad Yucky Awful Times in our history (that we know about) you’d find a general correlation with warm and cool periods. (Excluding things like the Black Death and the Theran Explosion.)

Here’s a few more fun graphs and articles, showing the pattern goes pretty much all the way back, and that the start of the “global warming,” Climate Optiumum periods of the very early Holocene – our own geological period – coincide pretty well with the end of the last Ice Age and the start of the Neolithic agricultural revolution. 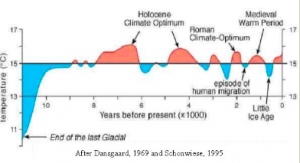 “There is no physical evidence showing that human carbon dioxide emissions have a significant effect on global temperature,” DuHamel continues. “Carbon dioxide is vital to life on earth and current atmospheric levels are dangerously low. Political schemes to cut greenhouse gases will have no measurable effect on temperature but will greatly harm the economy by impeding energy production and use.”

“The graph (above), based on reconstruction from the geologic and historical records, shows that there have been several warm/cold cycles since the end of the last glacial epoch,” explains DuHamel.

“The temperature during the Holocene Climate Optimum was 3ºF to 10ºF warmer than today in many areas. This is warmer than the extreme scenarios of the IPCC. Clearly, current temperatures are neither unprecedented nor unusually warm.” 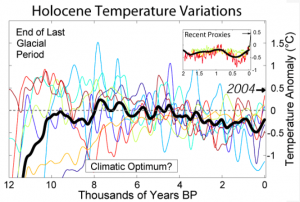 Once you pull the camera back a bit to look at average temps back to the last Ice Age, you see it’s overall been pretty steady, and (here’s a laugh) in fact there’s been a general downward trend since our Climatic Optimum – over the last 6000 years or so.

Obviously, we only start with Wikipedia.

Here’s a longer thing from the July 10, 2004 edition of Current Science:

But I guess, “Everything’s fine,” and “humans generally do pretty well when it’s a bit warmer,” don’t fit the political narrative as well or provide such fun headlines as “THESKYISFALLINGANDIT’SALLTHEFAULTOFRICHPEOPLE!!!”.

In fact, you only need to read a very teeny little bit of history… like no more than the Wikipedia pages about the River Thames. Here’s a funny thing: in ancient times there were hippos – yes, those big African water-beasts – in the Thames. This is because at that time, about 125,000 years ago, the climate was not at all the dark, chilly, gloomy matter we associate with Pudding Island today.

At Wikipedia you can also discover this other thing that everyone who used to read books already knew about: “Little Ice Age,” during the time when the wicked usurper and heretic Elizabeth I hosted “River Thames frost fairs,” little government sponsored festas on the Thames in the 17th century, when the river regularly froze over.  There were bonfires, skating parties, music, games and all sorts of merriment at the Crown’s expense.

This followed a long period historians call the “Medieval Warm Period” when harvests were always good and everything was jolly and merry and Catholic. 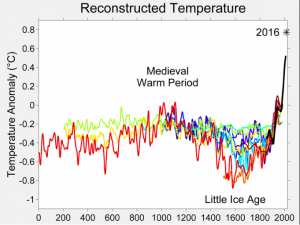 And isn’t it just a funny little teeny coincidence that just as the weather got chilly (Henry VIII reportedly rode on a sleigh to attend festivities on the frozen Thames) the Protestant Revolution broke out, and Europe was plunged into misery, chaos and darkness.

But as with everything natural, the average temperatures go in cycles, and the one thing humans are good at is adapting.

So, stop worrying. Prep. Buy a gun and learn to use it, teach your kids to use it safely; stockpile supplies; find a place in the woods to build a cabin… definitely do all those things, if for no other reason that the modern world is horrible and nice people should have anything to do with it. But stop getting distracted by the Climate Hysterians. There are a lot of reasons not to like the current Industrial Age and to figure out better ways to live. Enough that we really don’t need to make stuff up.

We’re going to work it out. We’ve survived worse.