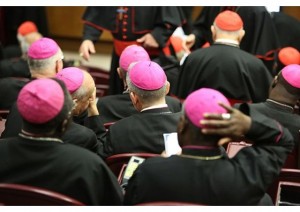 I should have known better than to spend half the night doing an analysis the day before the press conference:

The Synod on the Family: Can the “Good Bishops” Save Us? (Don’t Hold Your Breath)

Meanwhile, the Synod organisers continue to tighten up the procedures to ensure that the affair does not suffer from another unfortunate attack of overexposure to the public.**

There will be no reports published of the discussions of these groups, and no mid-term or final documents. Two well-placed Vatican experts, Sandro Magister and Andrea Gagliarducci, have both reported that there will also be no formal Apostolic Exhortation issued by the pope to summarize the bishops message to the faithful.

“What is certain is that there will not be a final message, no commission having been set up to write one,” Magister said on September 28. “The only embodiment of the provisory conclusions will be the pope’s talk at the end of the work, which will as a matter of course overtop and obscure all the other voices.”

As Pat Archbold said below, at the Vatican press conference today it was announced that the restrictions that had long been rumoured were not as restricted as we had been lead to believe. Someone asked me today whether I thought that was because they had had a change of heart (don’t laugh!) or because they had figured out that responding to comlaints about a lockdown with more lockdown was a bit… counterproductive, optics-wise. Or was it simply that the bishops themselves got into town last night and some sharp words were exchanged?

Who knows. Maybe Ed Pentin can write us another book.

I am, nonetheless pretty pleased to have been proved wrong about this at least.

What have we got now?

Bishops will be going into small groups, but a summary of their discussions will be published. As Philippa Hitchen reported today at Vatican Radio, “allowing more time for the small group discussions, known as Circuli Minores, where all members can play a more active part in the discussion.”

To, I’m sure, everyone’s collective relief, there will indeed be no mid-term relatio.

“A final text, or Relatio Finalis, drawing together the results of the three weeks’ work, will be presented on the morning of Saturday October 24th and voted on by the bishops that same afternoon. It’ll then be passed on to Pope Francis, who will use it as the basis for a final Synod document expected to appear sometime over the following year.

In His infinite mercy, may God grant that I’m wrong about the rest of it too…