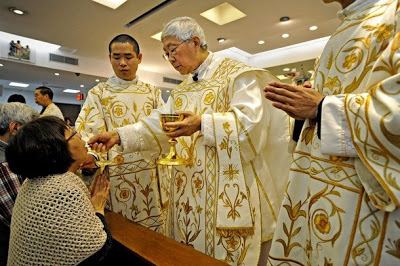 I know we were all expecting the crack to come from a completely different corner of the Church, and that hardly anyone has been paying attention to the eagerness of the Francis Vatican to throw the Catholic Church in China to the communist wolves.

As with every jurisdictional Vatican compromise with Communist governments the one in the offing smells of betrayal. There have been four secret meetings between Vatican representatives and Chinese government officials in the past two years, the most recent being at the end of April. Cardinal Zen, retired Bishop of Hong Kong, is not at all optimistic. He does not trust anything that Beijing would offer:

“We do not see any sign that would encourage the hope that the Chinese Communists are about to change their restrictive religious policy…..It is unthinkable to leave the initial proposal in the hands of an atheist government who cannot possibly judge the suitability of a candidate to be a bishop.”

The gist seems to be that the Vatican is working on a deal with the Chinese communists to “ratify” the government’s picks for Catholic bishops, essentially, placing the faithful into the care of those kinds of bishops that their brutal communist bully-boy government thinks are suitable.

But here it is: the first Cardinal of the Catholic Church who has finally confronted Francis.

Cardinal Zen – who has been one of the most outspoken defenders of the Faith in the worst possible circumstances – has said it: Do not follow this pope into his evil designs to destroy Holy Mother Church.

Zen to Chinese Catholics: If agreement with China is signed, do not follow the Pope

Should an agreement be reached between China and the Holy See, this will certainly have “the Pope’s approval”. But China’s Catholics will not be obliged to take it into consideration if their “conscience” tells them it is “against their principle of faith”. This is according to the Bishop Emeritus of Hong Kong, Cardinal Joseph Zen.

Don’t discount this, people. It means there are still lines that can’t be crossed. Cardinal Zen has been fighting this battle for the Catholic Church and the Catholic faithful in China for many years. And for most of that time he has had to fight it on two fronts; from attacks from Beijing – which are often of a most physically brutal kind – and from diplomatic attacks from Rome. It has been many, many years since anyone in the Vatican has had the bests spiritual interests of the faithful in China at heart.

Ostpolitic wasn’t just something that got invented at Vatican II to bring in Russian observers from the KGB-controlled Russian Orthodox. Vatican Secretaries of State have been applying the flagellum to the Body of Christ in China for most of my lifetime. Given that we’re talking about a Catholic population of about 65 million people – about the equivalent of the population of Italy or Britain, twice the entire population of Canada – that’s not an insignificant betrayal. It makes the Mindszenty affair look like an embassy garden party.

It’s also not insignificant that the de facto leader of 65 million Catholics has called for the faithful to oppose the pope who is flogging Christ in the person of the Church in China.

It’s also notable that the article itself is another hit piece from our good friends at La Stampa who recently lashed out at the opponents of Jorge’s little plans for us all.

In this piece from at One Peter Five, Steve speculates that they are lashing out precisely because they are discovering that the opposition is louder and more persistent – and more effective – than they had bargained for. Steve wrote about the Vatican “quietly panicking over its inability to comprehend the sort of asymmetrical information warfare they are faced with.”

“They cannot accurately gauge — let alone neutralize — the expansive influence of critics who operate almost entirely outside of established structures, instead building audiences predominately online and across a broad spectrum of social media platforms.”

I commented that this is something that utterly freaks them out.

They really have no idea at all how the internet works or what it is for. I remember them being completely paranoid about people using their phones in the journalists’ room at the Conclave. They actually had it set up to block all internet access in the hall they set up for journalists, and then couldn’t figure out why no one came to use it. The real journalists did all their interviewing in bars and cafes in the Borgo on the other side of the piazza.

At their press conferences, they really don’t understand how information about what’s being said unofficially (the Q&A) gets out before the press conference is even over. Most of these people have only just started to use email. They are totally accustomed to thinking themselves in complete control of the message, and the fact that they don’t even know how information is spread is something they’re vaguely aware of, but terrifies them.

“How do these people keep finding this stuff out?!!!”

It does seem like the Vatican machine is in defensive mode lately. We’ve been having people contact us with the very interesting information that certain key texts from previous popes have just gone magically missing from the .va website. So far we have seen disappeared Pius IX on the social reign of Christ the King and the inadmissibility of “ecumenism” as the term is currently used in ecclesiastical circles; and some documents from John Paul II (“Saint”) on the nature of marriage and the inadmissibility of allowing those in unrepentant adulterous liaisons to receive Holy Communion.

My rule for the Vatican webmasters is to never ascribe to malice what can as easily be attributed to incompetence. OTOH…

Now, despite this useful rule of thumb, I think it might just be a bit too far to stretch to imagine that this particular set of items – rather hot topics at the moment in ecclesiastical circles – is an oversight or a matter of the legendary incompetence of Vatican webmasters.