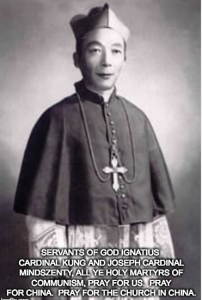 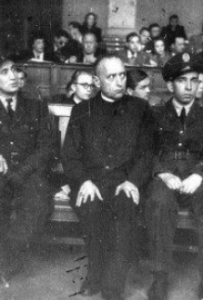 Infamous photo of Mindszenty after months of torture, taken at his show-trial.

To understand how the homosexual infiltration of the clergy happened, you must first understand when, why and how the Church first abandoned its opposition to Communism. The two issues are inseparable. The Church’s recent embrace of the Sexual Revolution comes from the same source; its infiltration by Marxists, and behind them, Freemasonry.

Quite a lot of that history can be read about here and here.

Many years ago I attended a conference put on jointly by the Mindszenty Foundation and Cardinal Kung foundation. It was in the early days of doing this work, and I had a lot to learn, and was greatly honoured to have been invited to attend. I was able to talk briefly to Ann Applebaum, the New York journalist just a few days before she won a Pulitzer Prize for her extraordinary book, “Gulag: A History”. 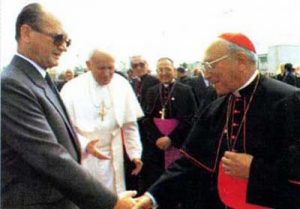 I went to the conference because I had just started understanding that the anti-communism of Pope John Paul II was very strictly limited. For Poland, the fight was on. But for China, the papal response was quite different.

In 2003, he started sending Roger Etchegaray to sell Vatican Ostpolitik to the Chinese. 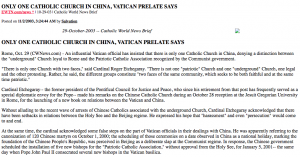 That line, “‘There is only one Church with two faces. There is not one ‘patriotic’ Church and one ‘underground’ Church, one legal and the other protesting.’ Rather, he said, the different groups constitute ‘two faces of the same community, which seeks to be both faithful and at the same time patriotic,’” made me understand that the things we thought about John Paul II and his agenda in geopolitics was nothing at all like what was actually happening.

It was the line that launched me into a deep, year-long, investigation of the history of the Vatican’s dealings with international Communism. The result was a realisation that the Church is being governed by – at best – deeply compromised men. Men with a political agenda that has nothing to do with Christ. It was that investigation that, ultimately, led me to abandon the entire “conservative” narrative.

Today’s news, that the Bergoglian Vatican has finally sealed the deal, is not the work of this pontificate. This has been going on for a LONG time. The deal is the work of generations of compromised men in the Secretariat of State, men whose agenda was set decades ago by other men, long dead. 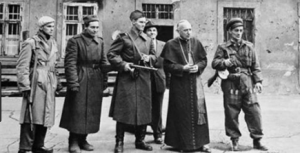 Mindszenty and his communist guards.

I won’t be writing about this tonight. I’ve just now got back from five days in Norcia, I’m exhausted and I have deadlines waiting on other subjects tomorrow. But if you want to know,  google the names “Casaroli,” “Villot,” “Montini,” “Etchegaray,” “Mindszenty,” “Kung,” “Silvestrini,” “Roncalli”…

It’s an important rule to remember that a great deal of what goes on has more to do with the Secretariat of State than the papacy.

Cardinal Zen in his own words: “In our acceptance of the provisions from Rome there is a limit, the limit of conscience.” 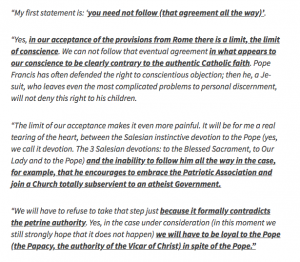 Catholic Cardinal: no obligation to follow a pope who betrays the Church 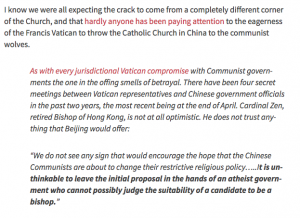 Parolin and the Church of Traitors 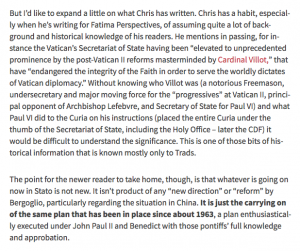 NB:  Its the next morning now. This has been edited slightly so that the flippin’ sentences make some kind of rational sense. I mentioned I was writing after spending a day on buses, right?